What is IFSAM?
Mission, history and vision

As stated in IFSAM’s statutes: The objectives of the Federation shall be the development of management research and teaching as a unified science and its advancement in all nations of the world. Means to these ends shall include:

From IFSAM Statutes (approved May 2021) Article 2 “Mission and objectives“

IFSAM is the International Federation of Scholarly Associations of Management. Our mission is to advance business and management research, teaching and practice throughout the world.
Management is broadly defined, encompassing all the different subfields (operations, marketing, accounting, finance, IT/IS, OB/OT, HRM, strategy, governance, ethics and CSR, …) for all kinds of legal forms of formal organizations, in all sectors of activity and regardless of the ownership structure.

To pursue this mission and provide direct benefits to our member associations and their individual members we:

As a Federation of Academies of Management, IFSAM dedicates itself to fostering the development of international scholarly activities in management research, pedagogy and practice. It seeks to do so in order that evidence and insights from diverse cultures, traditions and settings can be combined and exchanged to broaden, deepen and enhance the rigor and the relevance of the body of knowledge. As a Federation, IFSAM offers a truly polycentric and culturally informed platform for appropriate academies and learned societies that wish to affiliate and contribute. This capacity of the Federation to embody and present a diverse world view is especially evident in its efforts at encouraging the establishment and safeguarding of national associations of management, large and small, and in the hosting of its biennial World Congress.

The Federation’s establishment can be traced to a meeting of likeminded scholars active in their national and regional associations held on September 12th 1989. This gathering made collective preparations for the establishment of IFSAM and drafted its articles and by-laws. Subsequently, the first Council Meeting of the Federation held at Johann Wolfgang Goethe-Universität Frankfurt am Main in Germany saw the participation of 12 associations from Canada, Chile, CIS, Germany, Finland, France, Japan, Netherlands, Spain, United Kingdom and the USA. Some two years later, scholarly associations representing China, Korea, and Scandinavia joined the federation Reflecting the desire of the Federation to serve as a truly academic international platform the 1991/1992 elected Executive Committee Members were Tasuku Noguchi (Japan), Horst Albach (Germany), Janice M. Bayer(USA), Vesa Mäkinen(Finland) and Cary L. Cooper (UK).

Three fundamental key goals lay at the heart of the foundation of IFSAM and served to guide the Executive Committee and participating associations in their activities; namely the development of management research and education, the engaging in international mutual exchange and research, and the ongoing advancement of the field of management as a scholarly domain area. Motivated by these founding principles, our ambition for IFSAM today remains the creation and safeguarding of a platform of equals through which we can combine, exchange our diverse views on what constitutes the field and fully appreciate the importance of diverse, contextualized, authentic, embedded management scholarship.

Since its inception, the biennial congress has served as a critical platform for the Federation in facilitating knowledge exchange among international scholars. Each of these international meetings has sought to tackle a contemporary theme reflective of the dominant discourse and concerns of the day, both in the host location, but also more globally. Thus, High-Technology and Management served as the all-conference theme of the 1st IFSAM World Congress hosted in Tokyo, Japan in 1992 which saw some 559 delegates from 24 countries gather to debate the issues. This inaugural gathering, which served as a truly polycentric platform for combining and exchanging knowledge from around the world, was followed by the 2nd Congress held in Dallas, USA in 1994 under the theme Linking Management Scholars Worldwide. It too dedicated itself to the cause of combining diverse knowledge and views in order to enrich scholarship in management. The Management of Intangibles was the theme for Paris, France in 1996, while Globalization and its Impact on Management, Education, Research and Practice served as the central call for contributions for the 1998 Congress hosted in Alcalá de Henares, Spain in 19998. Taking Stock was the theme for the millennium meeting held in Montréal, Canada, while Management in a Global Context: Prospects for the 21st Century was the theme for the Gold Coast meeting in Australia in 2002. The challenges and opportunities inherent in globalization and which were becoming more apparent were further debated in subsequent meetings including in Göteborg, Sweden (2004), under the banner Management in a World of Diversity and Change and in Berlin, German (2006) in Enhancing Managerial Responsiveness to Global Challenges. The importance of creating an evidence based body of actionable knowledge which respected and incorporated insights from both the West and the East was reflect in the theme Fusion and Development of East and West Management which formed the core of the Shanghai, China 2008 Congress. The global financial crisis and the importance of

Justice and Sustainability in the Global Economy were debated in Paris, France in our 2010 meeting. Management Reimagined held in Limerick, Ireland in 2012 addressed issues relating to the rigour and the relevance of our scholarship, the importance of contextualization and the requirement for the incorporation of more diverse scholarship into the body of knowledge. The theme Management in Crisis lay at the heart of the 2014 congress hosted in Tokyo, Japan and was chosen in part because of the Great East Japan earthquake and tsunami and the Fukushima disaster which had struck in 2011 and the criticality of management studies to generating solution to some of the grand challenges being faced, both in Japan and indeed more globally. New World Equilibrium: Managing Regional Realities served as the theme for IFSAM’s 2016 meeting hosted in Mérida, Mexico, while 2018 saw us return to Shanghai, China to debate Business Management: Region Country∙ Culture and to observe first-hand the changing landscape of management scholarship in Asia. 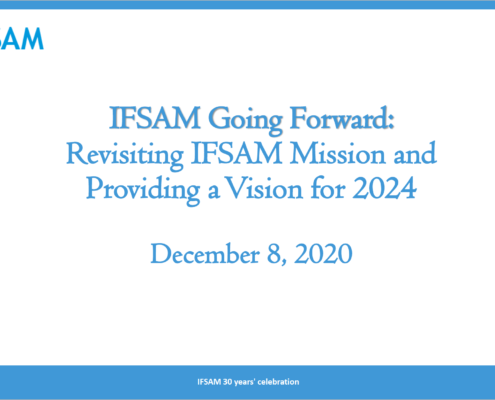 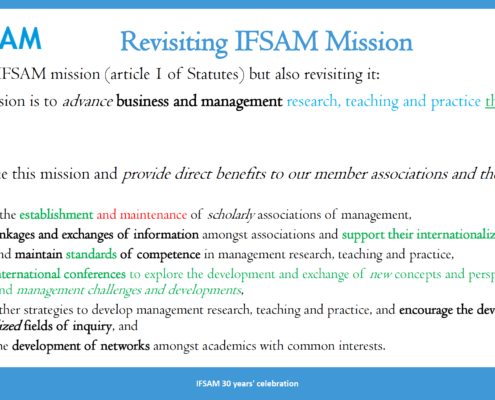 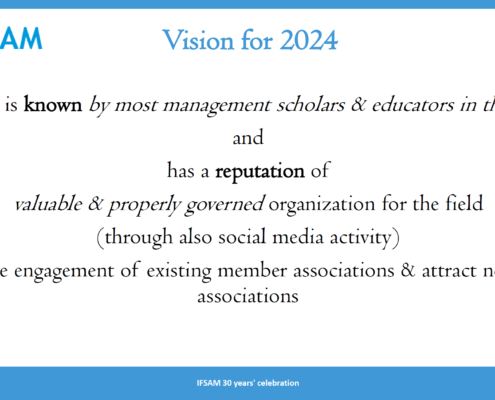 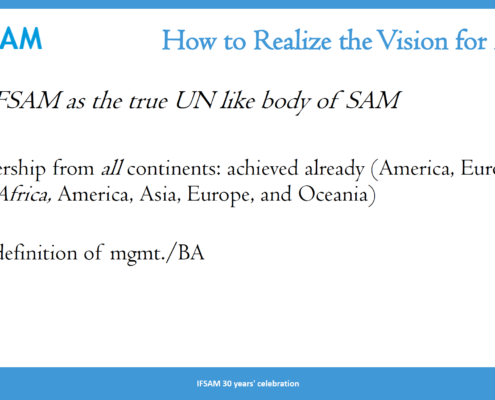 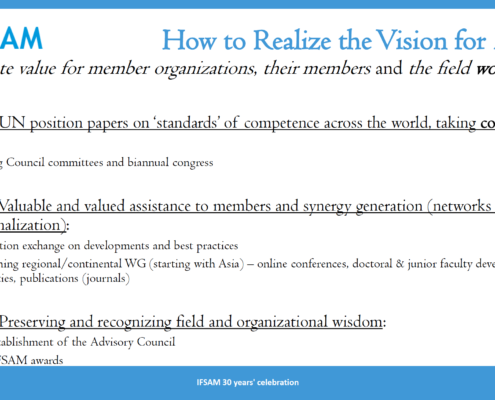 In 2020, given the Covid-19 pandemic, the world congress will take place online on Dec 4-7, with the topic

“The challenges of management research, education and practice during and after the current pandemic across the world” 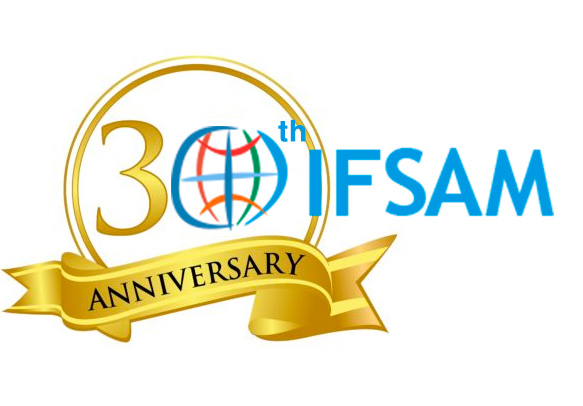 also with an online event, the 30th year anniversary of the Federation.

We may request cookies to be set on your device. We use cookies to let us know when you visit our websites, how you interact with us, to enrich your user experience, and to customize your relationship with our website.

Click on the different category headings to find out more. You can also change some of your preferences. Note that blocking some types of cookies may impact your experience on our websites and the services we are able to offer.

These cookies are strictly necessary to provide you with services available through our website and to use some of its features.

Because these cookies are strictly necessary to deliver the website, refuseing them will have impact how our site functions. You always can block or delete cookies by changing your browser settings and force blocking all cookies on this website. But this will always prompt you to accept/refuse cookies when revisiting our site.

We fully respect if you want to refuse cookies but to avoid asking you again and again kindly allow us to store a cookie for that. You are free to opt out any time or opt in for other cookies to get a better experience. If you refuse cookies we will remove all set cookies in our domain.

We provide you with a list of stored cookies on your computer in our domain so you can check what we stored. Due to security reasons we are not able to show or modify cookies from other domains. You can check these in your browser security settings.

We also use different external services like Google Webfonts, Google Maps, and external Video providers. Since these providers may collect personal data like your IP address we allow you to block them here. Please be aware that this might heavily reduce the functionality and appearance of our site. Changes will take effect once you reload the page.